I pushed my Algebra 1 students through our introductory chapter on functions quickly.  It's a lot of review for 90% of them, there's not much actual computation to do, and in the past students seemed to understand the concepts pretty quickly.  So, after a few whirlwind days of notes, we were ready for an activity.

Today we reviewed for their unit test.  The first half of class, students worked on a review worksheet in groups.  It went better than most other reviews - many students asked each other very good questions, and because it was low pressure (AKA not part of a game), students took their time to check their notes and help their peers understand.

Near the end of class, we had a function auction.  I was so grateful to Sarah at Math=Love for the idea at just the right time.  The students loved it!  They were so determined to find the actual functions that they pulled out their notes and compared techniques.  The auction portion took longer than I expected, even with only 9 relations to bid on.  One group had an interesting strategy - they decided to bid on several non-functions for the opening bid just 'in case' they were wrong and it was actually a function!  Once other groups started driving up the price for them, they abandoned the non-functions.

Overall, it was an activity that I will use again.  The pace and excitement did not lend itself well to review as a class, but groups did a great job of helping each other understand.  They had to make sure everyone was on the same page, or a bid paddle might go up without the whole group's consent!
Posted by Unknown at 11:48 AM 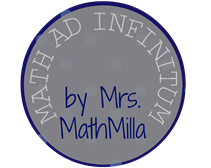